In the wilds and suburbs of Florida, an invasion is underway.

At stake, if Floridians can’t fend it off, are wholesale changes to the makeup of our native wildlife and habitat.

The Florida Fish and Wildlife Conservation Commission serves as the central command of the battalion attempting to fend off over 500 nonnative species of unwanted invaders. However, even in cooperation with other local, state and federal agencies, the spread of nonnative species in the Sunshine State is overwhelming, expensive — costing over $3 million to the state annually — and starting to look like a losing battle.

Climate change is only making it worse. A “time bomb” is how the FWC describes what effect climate change will have on Florida’s invasive species problem. Aggressive invasives, many of which are coldblooded, will thrive, spreading more rapidly and widely — even beyond Florida’s borders — as average temperatures increase. Threatened species will be at an even greater risk if this proliferation of lizards, snakes, amphibians and invertebrates continues to outcompete them.

The FWC is using a Risk Screening Tool developed by the University of Florida to efficiently identify the potential threat posed by a nonnative species. It uses a variety of factors to produce an Invasion Assessment Score and a Feasibility of Control Score to calculate if the species could be removed from the wild. Factors scored include its body size, what it eats and how far it ranges for its food.

For example, the green anaconda rates as a “very high” risk to Florida. The species was introduced in 2004 via the pet trade, but has not become “established,” meaning breeding and producing new generations. As of October, seven had been removed.

But if someone turned one loose again, it could become a serious problem for everything that swims or walks near marshes, swamps, rivers or lakes.

At its Feb. 25-26 meeting, the FWC voted unanimously to approve a rule banning the possession, sale and breeding of 16 species of snakes and lizards that have been destructive to Florida’s ecology.

The talk from the commissioners was tough, despite pleas from the reptile breeding and sale industry, which is bigger in Florida than one may think.

“These animals are creating enormous issues for our state,” said FWC Chairman Rodney Barreto. “I have always been proud that Florida is looked at as a leader. Let’s take a bold stance. We have to put our foot down. The time has come, and we hope other states will follow.”

Courageous step? Sure. Maybe it’s just me, but shouldn’t this measure have been enacted, say, 25 years ago? Other states must follow because, after all, they’re next. For an example of a worst-case scenario, review what happened after Spaniards turned hogs loose in Florida in the 1500s. They since have invaded over 35 states.

I know it’s slightly unfair to lay blame on the reptile trade. They aren’t the ones releasing lizards out their back door into the woods. But the small percentage of irresponsible owners is too many for a state like Florida, which is growing by 1,000 people a day.

A good comparison would be the recreational fishing community. Are most anglers ethical? Absolutely. They carefully release catches they don’t want. They use hooks and equipment that won’t harm the environment. They leave behind no trash. Yet visit a catwalk or jetty or bridge anywhere in Florida, and you’ll easily see the ugly signs of fishing left behind by the small percentage of those who simply don’t care.

Same thing with our beaches. Not everyone is leaving behind trash, but the few that do ruin it for the rest of us.

Owning a pet python sounds like a cool idea at first. So does getting a tattoo of your girlfriend’s name across your forehead.

But 10 years later, both turn out to be decisions you wish you had thought out a little more seriously.

Feeding a python for 20 years is one serious commitment. The rats aren’t very big fans of the program either.

The FWC actually includes some things to think about for those who are considering owning a nonnative species. Before buying an exotic pet, ask yourself:

h How big will this animal get?

h What does this animal eat?

I might add, these are also great questions to ask yourself before having children.

Floridians must work together to help curtail this invasion. As the Sunshine State warms from climate change, receives more rainfall and is brushed by more tropical storms, these marauders will move farther and faster.

h Invasive, nonnative species already in Florida may increase their range within the state.

h Introduction and establishment of new diseases and pathogens.

I’m happy the FWC took this long overdue step to curtail the introduction of apex predators into Florida’s ecosystem. I just hope it isn’t too little too late.

If you see an invasive species, the FWC recommends you collect the following information and send it to IveGot1.org, a website built by the University of Georgia, or email it to ExoticReports@MyFWC.com:

h Photograph the animal in question with a high enough resolution so that it can be enlarged to ensure species identification.

h Include the location where the animal was seen. GPS coordinates are best, but the location can also be a street address or detailed description of the area.

h Include the date when the animal was seen.

h Include any other information that is valuable.

Ed Killer is TCPalm’s outdoors writer. To interact with Ed, friend him on Facebook at Ed Killer, follow him on Twitter @tcpalmekiller or email him at ed.killer@tcpalm.com. 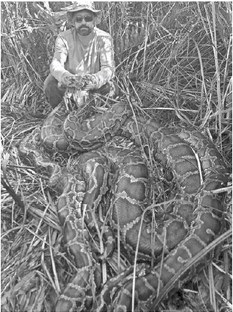 Conservancy of Southwest Florida wildlife biologist Ian Bartoszek with 235 pounds of pythons located while tracking a scout snake on Feb. 19, 2020.

Click here to see this page in the eEdition: